September 22 was the autumnal equinox, and sundown Sunday, September 25 Rosh Hashanah, the Jewish New Year.  I have always resonated with beginning the year in the fall–since for most of my life I have been in school, as a student and as a teacher, September rather than January has always been my time of new beginnings!  Now that I am retired, it still feels a bit strange to be able to vacation and travel in this time, as Wendy and I did again this year.  As I write this, the ten Days of Awe following Rosh Hashanah have just ended, culminating yesterday in Yom Kippur, the Day of Atonement. 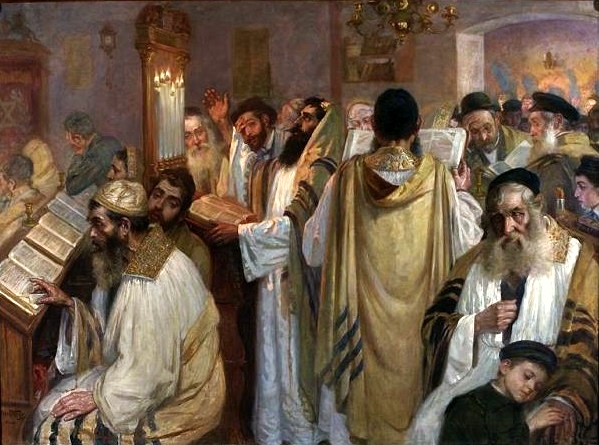 In Judaism, Yom Kippur is a fast day, on which one reflects upon the sins of the past year, repents before God, and resolves to live differently in the year to come.  In Scripture, both the rite for Yom Kippur and its significance are quite different from the day as it developed in Jewish life and practice.  But those ancient rites, and what they might mean for how we think about God, have a great deal to teach us about the ways that we read, and sometimes misread, Scripture.

First, take that word “atonement.”  Look it up in any dictionary, and the first definition you will find will be something like, “reparation for a wrong or injury.”  I recently encountered just that meaning in a word puzzle.

Growing up as a young Christian, that was certainly the way that I saw Christ’s atoning death on Calvary: as Jesus making reparation to God for my wrong.  The only way of understanding the cross I then knew was that Jesus had taken on himself God’s wrath, and the deserved punishment for my sin, so that I could be forgiven–an understanding of the atonement called “penal substitution.”  I grew up singing “There Is a Fountain Filled With Blood” and “Jesus Paid It All.”

However, like many believers, I have grown concerned about what this language says about God.  Do I really believe that God’s wrath can only be assuaged by blood, even the blood of his innocent Son?   Further, if it is solely the death of Jesus that atones for our sins, doesn’t that make his life and teaching irrelevant?

The history of our English word “atonement” suggests a different original meaning for this term, which may broaden our understanding of God, Christ, and the cross–as well as our reading of Yom Kippur.  The Oxford Dictionary dates “atonement” to the early 16th century, when it was coined out of  the phrase “at one”–influenced by the Latin word adunamentum  (“unity”), and an older word, “onement:” from the obsolete verb form, “to one,” meaning “to unite.”  The word was particularly used to talk about the reconciliation of God and humanity accomplished by Christ. When the King James Version of the Bible was translated in 1611, the relatively new expression “make atonement” was used for the Hebrew verb kipper, particularly in connection with Yom Kippur (see Leviticus 16).  That word apparently had the original meaning “cover.”  However, kipper came to be used specifically for rites of cleansing and purification.

In ancient Israel, Yom Kippur was the day when all lingering defilement from the previous year, either accidental or deliberate, was expunged, making full access to and communion with God possible in the new year.  The Common English Bible, which translates Yom Kippur as “Day of Reconciliation,” captures both the meaning of this ancient rite and the older meaning of the word “atonement” as dealing, not with reparation or punishment, but with communion restored.

The centerpiece of the ancient ritual for this day involved two goats.  One was selected by lot as the goat to be offered as the sin offering (the most familiar translation of the Hebrew khattat; the CEB reads “purification offering,” which better catches the significance of this sacrifice in ancient Israel).  The second goat was given to Azazel.  We have no idea what this means; perhaps Azazel was a monster or demon believed to live in waste places, or perhaps Azazel is an old word for “wilderness.”  The KJV read “scapegoat,” which has entered our language as a person or group blamed for wrongs done by others.

In Leviticus, the goat for Azazel is not a sacrifice, nor is it killed.  It is driven out into the wilderness, symbolically carrying away the defilement of the people.  The other goat, selected by lot as belonging to the LORD, is sacrificed.  Its blood is taken by the high priest into the inner room of the shrine, called the Most Holy Place, where God was believed to be specially present.  This inner chamber held a golden box, called the Ark (the Hebrew word for the Ark, ‘aron, simply means “box,” or “chest”). 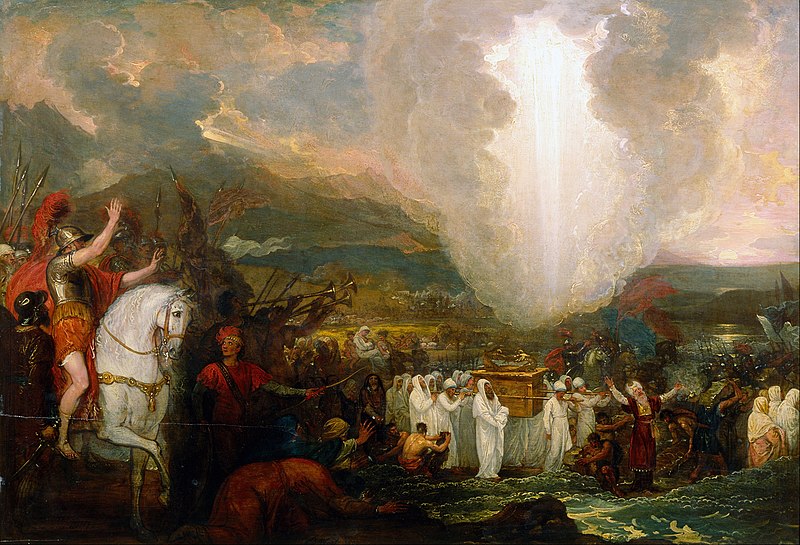 The lid of the Ark was a slab of gold, molded in the image of two cherubim: terrible semi-divine heavenly beings like winged sphinxes.The cherubim‘s inner wings overlapped to form a throne: the divine title “the LORD, who is enthroned on the cherubim” (for example, 1 Sam 4:4; Ps 80:1) recalls this connection.  The Ark itself served as the LORD’s footstool, making this golden box the intersection of divine and human worlds.  In the days of Israel’s wilderness wandering, Moses and Aaron encountered the LORD at the Ark (for example, Exod 25:22).

In Romans 3:23-25 (NRSV), Paul seems to use the rite of Yom Kippur as a way to understand the work of Christ on the cross:

since all have sinned and fall short of the glory of God; they are now justified by his grace as a gift, through the redemption that is in Christ Jesus, whom God put forward as a sacrifice of atonement by his blood, effective through faith.

The Greek word translated “sacrifice of atonement” in the NRSV (the KJV has “propitiation”) is hilasterion.  But this Greek word is used in the Greek translation of Jewish Scripture, the Septuagint, not for either the sin offering or the scapegoat but for the lid of the Ark: the kapporet.  The CEB translation “place of sacrifice” is a little better, though still misleading.  Paul’s point appears to be that the cross where Jesus’ blood was spilled has become the kapporet: the point where divine and human worlds intersect, and so the place where reconciliation–atonement–happens.

Reading the Bible in English, we are likely to miss all of this.  We may assume that, in Leviticus, Yom Kippur is the day of atonement in our relatively modern sense: referring to a reparation for sins, made in blood to an angry, judging God.  We may assume that the death of Jesus too must be read it this same way: as Jesus taking the punishment, or paying the price, for our guilt.  The meaning of the Hebrew words  kipper and kapporet, the Greek hilasterion, and even the history of the English word “atonement,” may well pass us by.

This is, of course, an argument for learning the biblical languages, so that subtleties and nuances often lost in translation can be recognized.  Even for those of us without access to the Hebrew, Aramaic and Greek texts of Scripture, it means learning to read the Bible carefully and prayerfully, making use of commentaries , study Bibles, and other resources that will “complexify” our plain reading of the text.  For all of us, it means remembering that the Bible was not written in English.  We need always to be aware of the bones beneath the flesh of the translation, and to resist the temptation to see our own surface reading as what the Bible “plainly” says.