In Western Christianity, February 2 is the Feast of the Presentation of the Lord, commemorating Jesus’ presentation at the temple (see Luke 2:22-40).  This old icon expresses Luke’s account simply and beautifully.

Joseph (portrayed, as is traditional, as a very old man) carries the two turtledoves that Leviticus 12:8 says a poor woman may offer instead of a sheep for her cleansing from the ritual uncleanness caused by childbirth: a defiling act, for mother and child alike (see Leviticus 12:2-8; note that in Roman Catholicism prior to Vatican II, this day was called “the Feast of the Purification of the Virgin”). 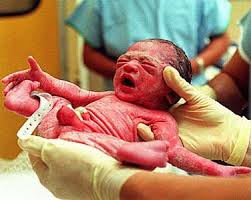 In the priests’ world view, the life of any being was contained in the blood, meaning that blood belongs exclusively to God.  Childbirth, being a bloody process, rendered mother and child alike ritually unclean.

The period of uncleanness depended on the sex of the child: 7 days of impurity for a male child, 2 weeks of uncleanness if the baby was female.  This was followed by an additional 33 days for a male child, 66 days for a female, during which the mother “must not touch anything holy or enter the sacred area” (Lev 12:4).  Although in the icon, little Jesus looks more like a young boy than a baby scarcely over a month old, Luke says that Joseph and Mary, as observant Jews, made the pilgrimage to Jerusalem “When the time came for their ritual cleansing, in accordance with the Law from Moses” (Luke 2:22): that is, forty days after Jesus’ birth (which is why the Feast is celebrated in the Christian West on February 2, 40 days after December 25).

Also pictured are Simeon and Anna.  Simeon, who had been promised “that he wouldn’t die before he had seen the Lord’s Christ” (Luke 2:26) holds baby Jesus, praises God for him, and prays a beautiful prayer, called (after its opening words in Latin) the Nunc dimittis:

Now, master, let your servant go in peace according to your word,
because my eyes have seen your salvation.
You prepared this salvation in the presence of all peoples.
It’s a light for revelation to the Gentiles
and a glory for your people Israel (Luke 2:29-32).

Anna, an 84 year old widow who “never left the temple area but worshipped God with fasting and prayer night and day. . . began to praise God and to speak about Jesus to everyone who was looking forward to the redemption of Jerusalem” (Luke 2:37-38).  In Luke’s gospel, then, from the very first, anyone with eyes to see and a heart to believe knows who Jesus is!  His presentation in the temple as a baby marks, in a sense, the beginning of his mission.

This celebration, coming in the dead of winter, is traditionally associated with hope for Spring’s return.  Good weather on this midwinter day is held to be a bad omen of more bleak days ahead, while bad weather augurs the swift return of sunshine and greenery–which is why, in America, February 2 is better known (heaven help us!) as Groundhog Day. We wait to see if a groundhog (in Pennsylvania, of course, THE Groundhog, Punxsatawney Phil) will see his shadow.

The association of February 2 with light and warmth leads to the other name for this feast day, Candlemas.  In the Revised Common Lectionary, the Old Testament reading for Candlemas every year is Malachi 3:1-4:

Look, I am sending my messenger who will clear the path before me;
suddenly the Lord whom you are seeking will come to his temple.
The messenger of the covenant in whom you take delight is coming,
says the Lord of heavenly forces.
Who can endure the day of his coming?
Who can withstand his appearance?
He is like the refiner’s fire or the cleaner’s soap.
He will sit as a refiner and a purifier of silver.
He will purify the Levites
and refine them like gold and silver.
They will belong to the Lord,
presenting a righteous offering.
The offering of Judah and Jerusalem will be pleasing to the Lord
as in ancient days and in former years.

Malachi comes at the end of the Book of the Twelve, and in the Christian Bible, at the end of the Old Testament.   The book is set well after the end of the Babylonian exile, when Judah once more has a temple, a priesthood, and a functioning sacrificial liturgy. Yet, according to the prophet, the people are bland, cynical, and indifferent.  Far from being moved to repentance and change by Malachi’s call to reform, the people say, “Anyone doing evil is good in the Lord’s eyes,” or “He delights in those doing evil,” or “Where is the God of justice?”(Mal 2:17).  In other words, Malachi’s community believes that either God does not see what they do, or that God does not care.

Malachi gives assurance that these questions and doubts are about to be addressed, for “suddenly the LORD whom you are seeking will come to his temple” (Mal 3:1).  Those who piously claim to delight in God’s covenant will soon have the opportunity to express their gratitude personally!

Actually, Malachi proclaims not only the advent of the LORD, but also of the LORD’s messenger.  In Hebrew, “my messenger” is  mal’akhi–the same word that appears at the beginning of the book (Mal 1:1), where mal’akhi is the one through whom this message of judgment is communicated.  While we might expect a name like Malachiah (“the LORD’s messenger”), “my messenger” seems an unlikely name for any parent to give a child. Probably, then, the prophet is anonymous, called Mal’akhi  because of Malachi 3:1.

But already within the editing of Malachi, we see further reflections on the identity of this enigmatic figure.  In the conclusion to this book (see Mal 4:5 [3:23 in the Hebrew text]), the prophetic forerunner of the day of the LORD has become Elijah, who was taken alive into the heavens in a chariot of fire (2 Kgs 2:11) and so can be called upon for this task. Perhaps as you have been reading this blog, the musical setting of Malachi 3:1-3 from George Handel’s famous oratorio The Messiah has been playing in your head–as it has in mine.  Charles Jennens, who composed the libretto for this oratorio, doubtless picked this passage for inclusion because, like Augustine, he regarded it as a reference Christ’s first and second coming.

It is also little wonder that this text should be used for Candlemas, a day celebrating Jesus coming into the temple.  But, as the old name for this feast reminds us, the occasion for Jesus and Mary coming to the temple on this particular day is their cleansing, mother and child, from ritual impurity–an idea also expressed in Mal 4:2-3:

He is like the refiner’s fire or the cleaner’s soap.
He will sit as a refiner and a purifier of silver.

In Malachi, it is the the priesthood (the “sons of Levi,” in Handel’s stirring oratorio) who, after being purified and cleansed by God in the coming trials, will at last present right offerings to the LORD, restoring Judah and Jerusalem to a right relationship with God (Mal 3:4).  A Christian reader may find the idea of ritual purity and uncleanness strange, even meaningless.  Indeed, regarding ritual purity and impurity laws relating to food, Jesus said:

Although we may see no need for cleansing from ritual impurity, Jesus’ words surely ring true. We know that our own thoughts, words and actions–or the actions and words of others–can make us feel dirty.  Understanding our need for forgiveness of sin, and freedom from guilt, may we, with Malachi, affirm that God can cleanse us from the stain of our sin, today and in days to come.