Last Friday saw the premiere of “Left Behind,” a new cinematic adaptation of the best-selling series of novels by Jerry B. Jenkins,  based on the notes of  Tim LeHaye.  Over the weekend, the film opened in 1,825 theaters, and made $6.8 million–not bad, but surely not as good as Cloud Ten Pictures hoped.  Most of those who saw the film were Evangelical Christians who already embraced Jenkins and LeHaye’s grim vision of the future.  The mass audience that the film’s backers had hoped Nicholas Cage’s name would draw mostly stayed away.

It might be assumed that, as a Bible Guy, I would want to see this movie–after all, isn’t it based on the Bible?  But I have not seen it, and do not intend to, because Tim LeHaye’s nightmare vision of the future is not biblical.

Search any concordance for the term “Rapture;”  you will not find it.  Neither Matthew 24:40-41 nor 1 Thessalonians 4:13, the two passages commonly alleged to describe the Rapture, use the term.  In context, Matthew’s statement “One will be taken and the other left” more likely describes sudden death or arrest by Roman officials than a supernatural rescue. In 1 Thessalonians, Paul speaks of Christ’s return, when both the resurrected dead and also “we who are living and still around” (note the present tense; Paul fully expected the end to come in his own lifetime) will meet the Lord as he descends to earth to rule.  This isn’t an escape plan–it’s a welcome back party.

The “Left Behind” franchise is based, not on Scripture, but on one particular reading of Scripture: the premillennial ideology of Darbyite Dispensationalism.  Let’s unpack that claim step by step.  Revelation 20:1-15 speaks of a thousand-year reign of Christ on the earth–the millennium.  From early on, different Christians understood this in different ways.  While many, such as Tertullian, insisted that John referred to a literal thousand-year earthly reign of Jesus following his return to earth–hence, premillennial (Against Marcion, 3:25), others,  such as Origen, considered John’s visions a metaphor for Christ’s spiritual reign rather than a literal description of future history–hence, amillennial (De Principiis 2.11.2-7).  Augustine advocated a mediating position that for generations dominated Christian interpretation: he read the thousand years as a metaphorical depiction of the age of the church, after which God’s kingdom would be ushered in (City of God 20.7).

In contemporary American Christianity, the  literalism of Tertullian’s premillennial reading dominates.  According to a 2010 study by the Pew Research Center, 41% of Americans surveyed expect Christ to return before 2050; among white Evangelicals, this number rises to 58%.

So how did premillennialism come so thoroughly to win the day?  In the 1830s John Nelson Darby, an Irish preacher in the Plymouth Brethren church, resolved the Bible’s conflicts and contradictions by dividing history into distinct periods called “Dispensations.”  For example, the ritual laws and Sabbath laws of the Old Testament could be discounted as belonging to a previous dispensation, and hence no longer applying to Christians.  This chain of dispensations extended into the future as well, culminating in a period of wrathful divine judgment from which true Christians would be spared by a supernatural rescue operation: the “secret Rapture.”

In the late 17th century, long before Darby, Increase and Cotton Mather had preached that the faithful would be delivered before the day of God’s wrath.  But Darby placed that deliverance into a detailed description of future history, and transformed it into a miraculous, supernatural escape plan: the Rapture. 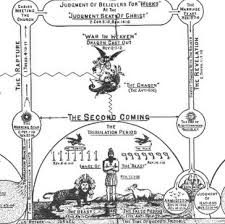 This idea was broadly disseminated by Cyrus Scofield through the detailed notes and charts in his extremely popular reference Bible, first published in 1909.

But it was Hal Lindsey‘s application of Darby’s ideas in the wake of the Six Day War that led to the cultural phenomenon described in the Pew study, as well as to the Left Behind franchise.  In his 1970 book The Late Great Planet Earth, Lindsey gave premillennialism a distinctive, tantalizing twist.   With the re-establishment of the state of Israel, sealed by its “miraculous” victory in the Six-Day War, God’s “prophetic clock” had started ticking.  We are now in the last days.  The countdown to the Rapture has begun.

The damage done by this unbiblical ideology is far reaching.  It has caused us to forsake our God-given responsibility to care for the earth (Genesis 1:26-28) because we are leaving this world anyway.  It has caused us to reject Palestinian cries for justice, despite the Bible’s admonitions (Exod 22:21-24; Lev 19:33-34; Deut 10:18-19), because Israel must be re-established out to its ancient borders so that Jesus can come back.  It has made us ignore the plain teaching of Scripture that Christ’s church is called to be one (John 17:20-23) because the One World Church will be the tool of the Antichrist.  It is long past time for us to get back to the Bible, and to leave “Left Behind” behind.

2 thoughts on “Leaving “Left Behind” Behind”