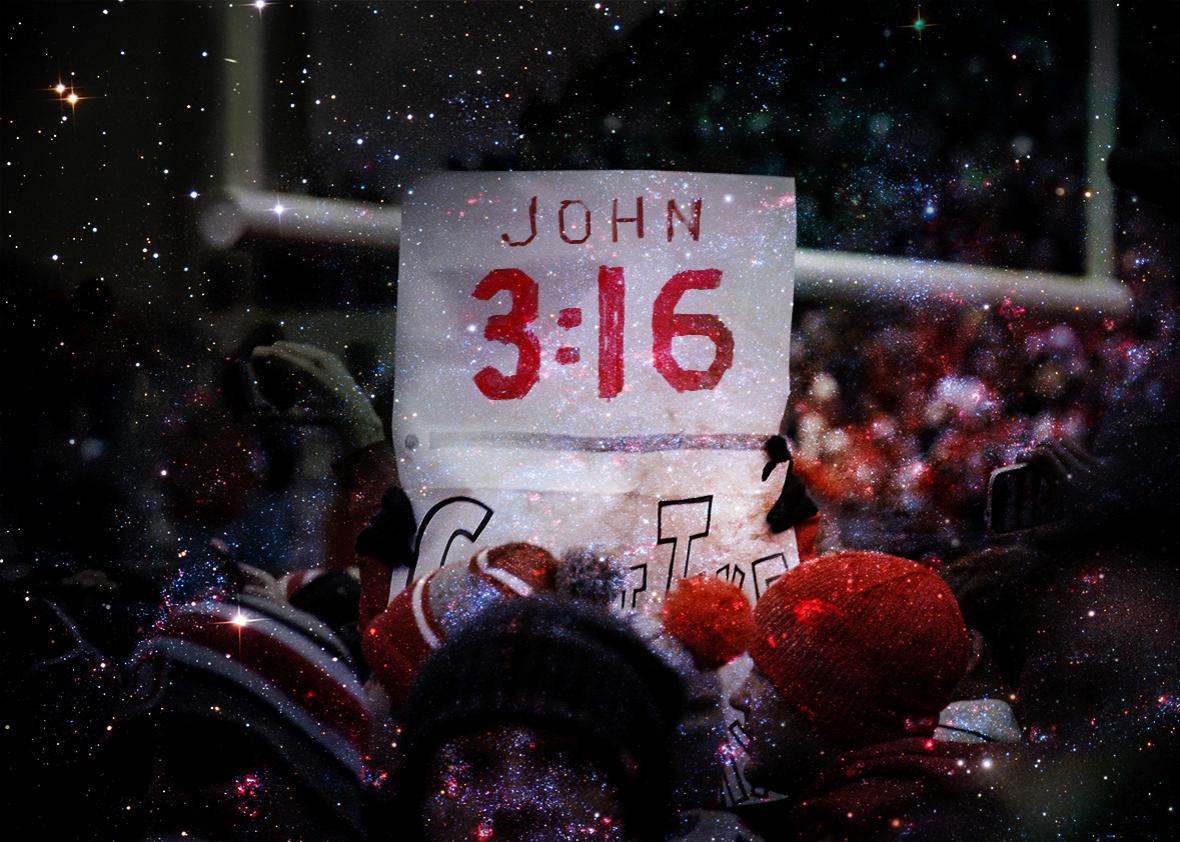 Sunday’s Gospel features John 3:16–perhaps the most memorized and quoted passage in Scripture.  I learned it myself in the King James:

For God so loved the world, that he gave his only begotten Son, that whosoever believeth in him should not perish, but have everlasting life.

John 3:16 has embedded itself so deeply in our culture that it can be held aloft at sporting events, posted on billboards and bumperstickers, worn on tee-shirts, and even flaunted in tattoos!  Perhaps more than any other passage, it is the cornerstone of Evangelical Christian faith: if you believe in Jesus, then you will be saved.

But what does it mean to “believe in” Jesus?  In the Greek, the verb used in this verse is pisteuo, the verbal correspondent to the noun pistos, “faith”–so it would be better rendered as “have faith.”  According to nineteenth-century Bible scholar Joseph Henry Thayer, pisteuo expresses “the conviction and trust to which a man is impelled by a certain inner and higher prerogative and law of his soul.”  Having faith in Jesus means committing myself to Jesus; it means trusting that, in Jesus, God’s love for the world–and for me–is made manifest. However, most English translators follow the KJV here in translating the verb as “believe.”

We may wonder what difference this makes: after all, aren’t “belief” and “faith” the same thing?  But I am persuaded that they are not–and indeed, that confusing “belief” with “faith” has done considerable harm in American Christianity. “Belief” is intellectual assent to a concept: “I  believe it is going to be a sunny day.”  We use “belief” in that everyday sort of way when we lack the evidence for certitude, and are fairly, but not absolutely, sure of what is going to happen–after all, the sun is shining now, but it may yet cloud up and rain! But as used in many Christian circles, “belief” instead conveys an absolute certainly, despite the lack of evidence, or even in the face of conflicting evidence.  Indeed, believing without evidence, or against the evidence, is seen as evidence of a strong faith.  Forgetting that Jesus himself did not condemn Thomas’ desire for evidence, such Christians find sanction in John 20:29: “Do you believe because you see me? Happy are those who don’t see and yet believe.”

Church historian Diana Butler Bass observes a similar misunderstanding in the Christian creeds.  The Latin verb credo, from which we get our word “creed,” doesn’t mean“I believe,” but rather, she notes, “I set my heart upon.” The difference is “a shift from information about to experience of”–that is, from belief to faith!  Indeed, in her revolutionary book Christianity After Religion,  Bass writes:

A great modern heresy of the Church is the heresy of believing. Christianity was never intended to be a system or structure of belief in the modern sense; it originated as a disposition of the heart.

Confusing faith with belief has made many Christians suspicious of other sources of knowledge–and of science in particular.  So, regarding the vaccines now available for combatting the COVID-19 pandemic, only 54% of white Evangelicals say that they will probably get the vaccination, while 45% say they will not: the worst record among any religious group surveyed.  John Fea, a U.S. historian at Messiah University, was unsurprised:

“There’s a long history of anti-science within American evangelicalism,” Fea said. “It goes back to the Scopes trial and evolution in the 1920s,” in which evangelicals debated Darwin’s theory of evolution.

Also disturbing is the susceptibility of such Christians to conspiracy theories–which one is also required to accept “on faith.”  In a recent survey conducted by the American Enterprise Institute’s Survey Center, one statement to which participants were asked to respond was, “Donald Trump has been secretly fighting a group of child sex traffickers that include prominent Democrats and Hollywood elites”–a bizarre idea that is a central claim of QAnon.  Among those who regarded that statement as mostly or completely true, 27% were white Evangelicals.  Ed Stetzer, an evangelical pastor and executive director of the Wheaton College Billy Graham Center, sadly observes

“People of faith believe there is a divine plan — that there are forces of good and forces of evil at work in the world.  QAnon is a train that runs on the tracks that religion has already put in place.”

Perhaps the best way to derail that train is to uncouple “faith” and “belief.” 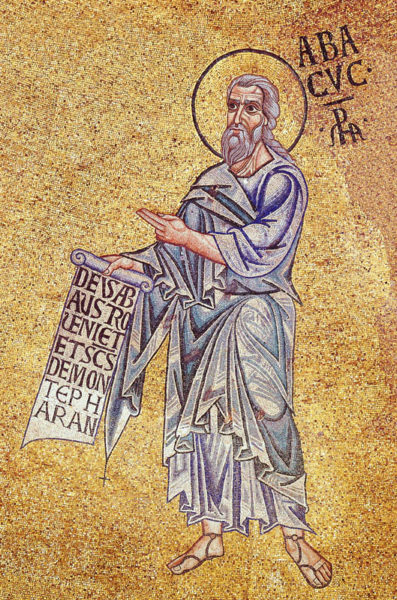 The best way into an authentic biblical understanding of faith is through the prophet Habakkuk, who speaks out of the doubt, fear and anxiety prompted by the rise of Babylonian imperial power in sixth century Judah.   Habakkuk 2:4–one of the primary texts Paul cites for his doctrine of justification by grace through faith (see Rom 1:17 and Gal 3:11)–expresses how the righteous are to live in such perilous times:

Look at the proud!
Their spirit is not right in them,
but the righteous live by their faith (Hab 2:4, NRSV)

The Hebrew word ‘emunah (rendered “faith” in the NRSV) typically has to do with steadfastness, trustworthiness, and reliability.  Habakkuk contrasts the righteous one (Hebrew tsaddiq) and the one who is not righteous, but is instead “puffed up” and proud.  The righteous “live by their [changed in the NRSV for reasons of inclusivity; the Hebrew reads “his”] faith” (Hebrew be’emunato yikhyeh). If “his” refers, as seems simplest, to the righteous one, then “his faith” refers to the steadfastness, trustworthiness, and reliability of the righteous: in a word, to their commitment. The Jewish Publication Society’s English translation of the Hebrew reads, “the righteous man is rewarded with life for his fidelity.”

Unlike the wicked, who are concerned only for themselves, the righteous live lives of commitment and devotion to God and to God’s torah (that is, God’s instruction, or law).   Habakkuk 2:5 and the woes that follow in 2:6-20 serve by contrast to describe the selfish, arrogant lifestyle of the wicked, and so to legitimate God’s judgment upon them.  This verse is not about what the righteous believe about God, but about their commitment to God.

Our oldest references to the book of Habakkuk come from the so-called Dead Sea Scrolls–indeed, from one of the first scrolls found, in what is now called Cave 1.  It is a Bible study (in Aramaic, a pesher) called 1QpHab, interpreting Habakkuk as a prophecy concerning the Essene community at Qumran.   The portion dealing with our passage from Habakkuk (1QpHab 8:1-3) says that Hab 2:4 “concerns all in the house of Judah who observe the torah, who God has removed from the house of judgment on account of their hard labor and their faithfulness to the Teacher of Righteousness.”  This early Jewish community understood our passage to be about faith, not belief.

The Septuagint (the Jewish Scriptures in Greek translation) of Hab 2:4 has pisteos mou “my [God’s] faith,” rather than “his faith.”  This may reflect a common scribal error (the third person and first person pronominal endings are often confused), but it is also possible that the translators are interpreting the text here, refocusing the verse upon God’s faithfulness.  Still, the Greek captures the point we have been making: in contrast to the self-righteous, who are self-centered and proud, the truly righteous are characterized by their devotion to God. Paul cites Hab 2:4 twice, in Galatians 3:11 and in Romans 1:17.   In Galatians, Paul argues that God’s promise to Abraham is not restricted to Abraham’s physical descendants, but rather applies to all, Jew and Gentile alike, who like Abraham believe God’s word (Gal 3:6-14). In that connection, Paul asserts, “But since no one is made righteous by the Law as far as God is concerned, it is clear that the righteous one will live on the basis of faith” (Gal 3:11).

Similarly, Paul cites our passage from Habakkuk in Romans 1:17 as part of his larger argument for the commonality of Jew and Gentile before God: first in condemnation, and then in salvation through Christ (see Rom 2:9-29; 3:21-26). Paul declares, “I’m not ashamed of the gospel: it is God’s own power for salvation to all who have faith in God, to the Jew first and also to the Greek” (Rom 1:16). To demonstrate this truth, Paul cites Hab 2:4b: “God’s righteousness is being revealed in the gospel, from faithfulness for faith, as it is written, The righteous person will live by faith” (Rom 1:17). Paul’s point, in both Galatians and Romans, is the inclusion of the Gentiles, not (as is sometimes claimed) the exclusion of the Jews (see Rom 11:13-26) or the rejection of the law (see Gal 3:19-29).

Intriguingly, Paul’s citations of Hab 2:4b do not follow either the Hebrew (“his faith”) or the Greek (“my faith”) text!  James Dunn sees Paul as charting a middle course between them, embracing both (James D. G. Dunn, Romans 1—8 Word Bible Commentary 38A [Dallas: Word, 1988], 45).  Referring back to Rom 1:17, where God’s righteousness is revealed “from faithfulness to faith,” Dunn sees the Habakkuk citation as referring to faith in both senses:

He who is maintained within or has been brought into the relationship with God which brings about salvation, by the outreach of God’s faithfulness to his own faith, shall experience the fullness of life which God intended for humankind as he lives in the dependence of faith on the continuing faithfulness of God (Dunn 1988, 48).

Like Dunn, Richard Hays proposes that Paul’s citation is purposefully ambiguous, but in a different sense. As Paul uses it in Gal 3:11, the phrase from Hab 2:4 means:

The second option is of greatest interest for Hayes, who argues that “for Paul the obedience and faithfulness of Jesus Christ are of central soteriological significance. . . Jesus’ faith is not merely exemplary, as in nineteenth-century liberal theology, but vicariously efficacious” (Hays 2002, 210). In any case, Paul’s citation of Habakkuk intends all three: “Paul’s thought is rendered wholly intelligible only if all three of these interpretations are held together and affirmed as correct” (Hays 2002, 140).

In the deepest sense, what Paul affirms in his use of Hab 2:4b is not unlike what the authoritative compendium of rabbinic teaching, the Talmud, affirms about this same verse.  In b. Makkot 23b-24a,  Rabbi Simlai teaches that though there are 613 commandments in Torah, they are condensed into eleven by David (Ps 15), into six by Isaiah (Isa 33:15-16), into three by Micah (Mic 6:8); into two in Isaiah 56:1, and into one in Amos 5:4 (“The LORD proclaims to the house of Israel: Seek me and live”) and in Habakkuk 2:4–“the righteous live by their faith”!  In the claim that all of the commandments in Torah find their heart in our passage and in Amos 5:4, Rabbi Simlai, like Paul, affirms that a dynamic, committed relationship with the God must come first and remain foremost in our lives.  Salvation does not come through, like the White Queen in Through the Looking Glass, “believing six impossible things before breakfast.”  It comes through faith: through commitment to God and trust in God’s love for us, demonstrated and made accessible in Jesus Christ.