Growing up, I learned the Ten Commandments as they are presented (from the KJV of the Exodus passage) and numbered here, in this photograph of the old commandment boards from the original Anglican Church (built 1752-3) of Trinity-on-the-Green, New Haven, CT (photographed by John Wallace). But, as it turns out, not all faith traditions count to ten in the same way!  Depending on how–and where–we count, we may come up with a different numbering of the ten (or eleven!) commandments.

In Judaism, the first “commandment” really doesn’t seem to be a commandment at all.  This stained-glass window from the Plymouth Synagogue (built in 1762, it is the oldest synagogue in England; indeed in the English-speaking world) shows that the first commandment begins ‘Anoki Yhwh: “I am the LORD your God, who brought you out of the land of Egypt, out of the house of slavery” (Exod 20:2; Deut 5:6).  That makes the second commandment the one that, as a young United Methodist, I learned to call the first: “You must have no other gods before me” (Exod 20:3; Deut 5:7)–in Hebrew, Lo’ yihyeh-leka ‘elohim ‘akherim ‘al-penay. 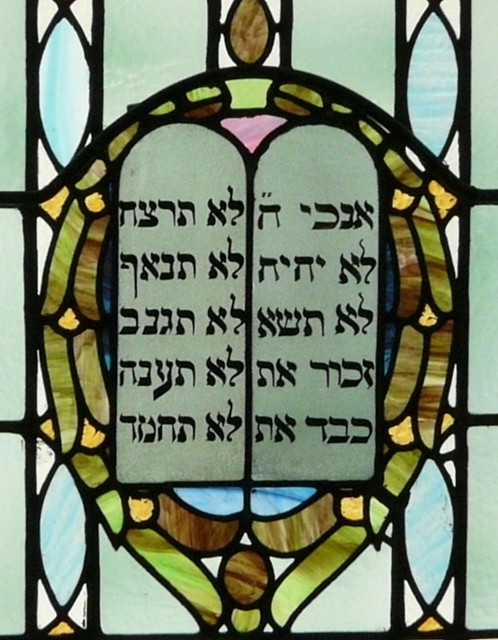 Recall, though, that the Hebrew expression for this passage, ‘asheret haddebarim, actually means not “the Ten Commandments,” but  “the ten words.” Similarly, “Decalogue,” a title often used for this text, means literally “ten words.”  In the first of these “words,” God introduces Godself, by name, as Israel’s deliverer.  In Hebrew, God’s name is YHWH.  Pious Jews, out of respect for the Name (see Exod 20:7; Deut 5:11), do not attempt to pronounce it, but simply say “Adonai,” or “My Lord;” most English translations accordingly render YHWH as LORD in all capital letters.  In Judaism, God’s self-identification becomes very appropriately the first “word,” on which all of the words that follow depend.

Another difficulty with numbering and listing the Ten Commandments is that they are recorded twice in our Bibles: not only in Exodus 20:1-17, but also in Deuteronomy 5:1-21.   Indeed, one reason that the fifth book in our Bibles is called “Deuteronomy” (“second law” in Greek) is that this second account of the commandments is found there.

While the two versions of the Decalogue are over broad swaths identical, there are differences.  For example, the priestly Decalogue in Exodus 20 says that we are to “Remember [Hebrew zakor] the Sabbath day and treat it as holy. . . .  Because the LORD made the heavens and the earth, the sea, and everything that is in them in six days, but rested on the seventh day” (Exod 20:8-11; see the priestly account of creation in Gen 1:1–2:4a).  But the Deuteronomic version reads, “Keep [Hebrew shamor] the Sabbath day and treat it as holy . . . Remember that you were a slave in Egypt, but the Lord your God brought you out of there with a strong hand and an outstretched arm. That’s why the Lord your God commands you to keep the Sabbath day” (Deut 5:12-15). Which version of the Ten Commandments we are reading makes a particular difference in the meaning, and possibly in the numbering, of the last commandment.  In the priestly Decalogue,  Exodus 20:17 (which many of us learned as the tenth commandment) states,

Here, your (explicitly male) neighbor’s house–that is, all that he owns–is placed first, followed by a list of its contents.  His wife, like his slaves, his domestic animals, and everything else included in his house “belongs to your neighbor,” and his ownership is to be respected: the same verb (khamad) is used both times in this verse (the NRSV, like the KJV, simply has “covet”).  Other texts–most notably, the priestly account of creation to which the Sabbath command alludes (Gen 1:27)–challenge this idea, but in the priestly Decalogue, women are property.

Do not desire and try to take your neighbor’s wife.

Do not crave your neighbor’s house, field, male or female servant, ox, donkey, or anything else that belongs to your neighbor.

Lutheran and Roman Catholic churches, following the version of the Decalogue in Deuteronomy 5, appropriately regard coveting a neighbor’s wife and coveting a neighbor’s property as two different commandments: the ninth and the tenth, respectively.  They avoid having eleven commandments by, with Jewish tradition, reading the prohibition of idols (Exod 20:4-6; Deut 5:8-10, which I learned to count as the second commandment) as part of the command to have no other gods (commandment number one in my Sunday School class–but, remember, the second of the ten words in the synagogue).

The differences in the ways that we count to ten are more than ecclesiastical curiosities.  They remind us of how much our traditions have to learn from one another, and lead us deeper into reflection on this most numbingly familiar of biblical passages–reminding us that the Bible never loses its capacity to surprise and challenge us.