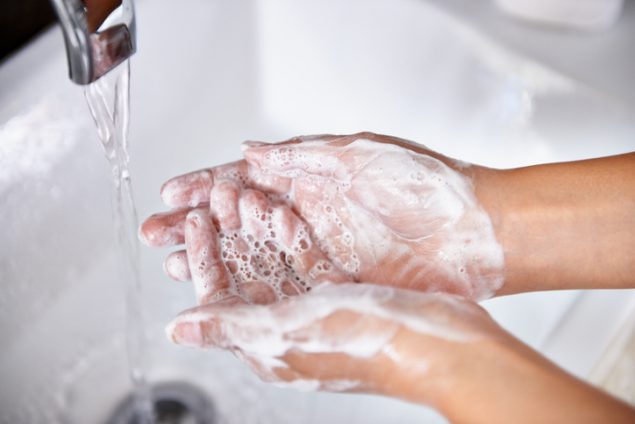 At the advice of the CDC and many other health agencies, we have been washing our hands more frequently than ever before to help slow the spread of the novel coronavirus.  As a result, like me, you may have found to your chagrin that you did not know how to wash your hands properly!  Specifically, the best advice is that we need to wash our hands for at least twenty seconds.

Since we may not have a stopwatch handy at our bathroom or kitchen sinks, a variety of alternate means for timing our hand-washing have been advanced.  One very common proposal, illustrated to hilarious effect by humorist Dave Barry, is singing “Happy Birthday” twice through.  Many Trekkies have noted that the famous intro to the original Star Trek series and to its sequel Star Trek: The Next Generation takes about twenty seconds to recite.

My sister Tracey sent me this meme, which has inspired me to time my hand-washing by praying the Lord’s Prayer–combining good hygiene with devotional practice.  According to the Didache, an early Jewish-Christian book of church discipline dating to the late first-early second century CE, the Lord’s Prayer is to be prayed three times a day (Didache 8:11 [3 in Greek]).  Praying while hand-washing more than meets that requirement!

The Didache also gives this text for the Lord’s Prayer:

Our Father, which art in heaven, hallowed be Thy name;
Thy kingdom come;
Thy will be done, as in heaven, so also on earth;
give us this day our daily bread;
and forgive us our debt, as we also forgive our debtors;
and lead us not into temptation, but deliver us from the evil one;
for Thine is the power and the glory for ever and ever (Didache 8:4-10 [2], translated by J.B. Lightfoot, Apostolic Fathers)

If you are Presbyterian, Baptist, UCC, or Reformed (or if you grew up in the former E.U.B.), this is likely to look and sound very familiar.  Indeed, with but a few slight differences (and one major one, discussed below), the Didache has the same Greek text as Matthew 6:9-13 (Lightfoot’s translation is very similar to the KJV of this passage).  But for me, growing up Methodist, the Lord’s Prayer ran, “forgive us our trespasses, as we forgive those who trespass against us. ”

To be honest, this has thrown some confusion into my hand-washing ritual.  While I grew up praying “Forgive us our trespasses,”  long tenure in Presbyterian institutions, as well as frequent worship in Presbyterian churches, has interjected “Forgive us our debts” into my head.  Further, in worship at my seminary, we pray “Forgive us our sins” as a step toward ecumenism.  The unfortunate consequence is that, when I come to this line in the prayer, I sometimes lose my way. 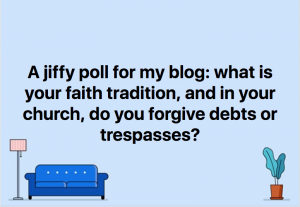 Apparently, I am not alone!  When I did this jiffy, unscientific poll on my Facebook page, I found the expected range: United Methodists, Lutherans, Episcopalians (indeed, Anglicans of all stripes), and Roman Catholics all use “trespasses” when praying the Lord’s Prayer; the above-mentioned churches use “debts;” and a smattering of congregations have moved to the English Language Liturgical Consultation‘s 1988 version (also found in the United Methodist Hymnal, 894) which uses “sins.” But several friends commented on the confusion the different versions of the prayer could cause, particularly when moving from context to context.  My friend and colleague in ministry Liddy Gerchman Barlow, Executive Minister at Christian Associates of Southwest Pennsylvania, said, “As an ecumenist, I often say ‘forgive us our’ and then stop to hear what everyone else says before continuing.”

So, why these differences in a prayer we claim that Jesus taught us to pray?  The language in the version of the Lord’s Prayer I learned melds the language in the two Gospel citations of this prayer (Matt 6:9-13 and Luke 11:2-4) with the closely associated teaching on prayer in Matthew 6:14-15 and Mark 11:25.  As the more formal English of the NRSV makes clear in these passages, the prayer in Matthew uses “debts” (Greek opheilemata) and “debtors” (Greek opheiletais), Luke uses “sins” (Greek hamartias), while the additional teachings on prayer in Matthew and Mark use “trespasses” (Greek paraptomata).  Scholar and Middle East missionary Kenneth Bailey offered a possible solution to this variety of Greek expressions.  He proposed that Jesus, teaching in Aramaic, may have used the term khoba’ or khobah, which can mean either a sin or a debt (see the comment by Fr. Dustin on the linked page for the reference).

Of course, an added wrinkle is that there are different ways of rendering the Greek into English, as the ELLC version and the CEB of Matt 6:9-13 show.  Evidently, while John Wycliffe (1395) translated opheilemata in Matt 6:12 as “debts” (as would the 1611 King James Bible), William Tyndale (1526) rendered it as “trespasses.”  Thomas Cranmer’s Book of Common Prayer (1549) followed Tyndale’s reading, making that wording the standard in the Church of England, and hence in Methodism.

It is a bit surprising that the “trespasses” version prevailed in the Roman Catholic Church.  The Latin of both the traditional Roman Catholic Pater Noster (“Our Father”) and the Vulgate of the Matthew passage (curiously, the two are not quite the same!) uses debita (“debts”) and debitoribus (“debtors”).  Still, the English language Catechism of the Catholic Church, Part Four, Section Two not only teaches the version with “trespasses,” but curiously claims, “The liturgical tradition of the Church has retained St. Matthew’s text”!

In Catholic practice as in the more liturgical Episcopal and Lutheran contexts, the concluding doxology, “For thine is the kingdom, and the power, and the glory, for ever,” is added by the priest.  Indeed, critical Greek texts of the New Testament note that the doxology in Matt 6:13 is not found in the oldest and best texts of the Gospel, and so while it was retained in the KJV, in most modern English translations these words of praise are moved to a footnote.  Still, their inclusion in the Didache confirms their ancient pedigree.  It was common practice to extemporize words of devotion and praise at the end of public prayers; that this particular doxology became fixed in the tradition so early shows that it was a frequent favorite. 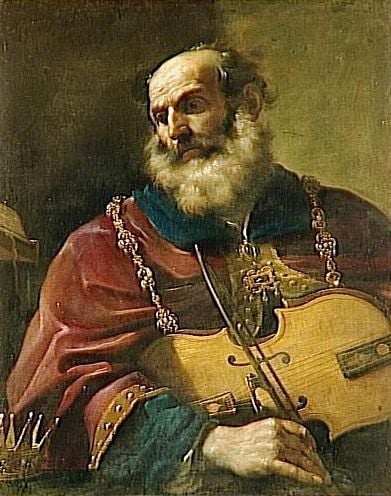 Its Old Testament source may be a surprise. 1 Chronicles 29:10-22a presents the last words of King David.  It is certainly appropriate that, in Chronicles, David’s last words are words of praise to God, an invitation to the people to join in worship and praise, and a blessing on his son and successor Solomon. 1 Chronicles 29:11 will sound particularly familiar:

To you, LORD, belong greatness and power,
honor, splendor, and majesty,
because everything in heaven and on earth belongs to you.
Yours, LORD, is the kingship,
and you are honored as head of all.

The concluding doxology of the Lord’s Prayer plainly derives from this passage. In David’s last words, however, these words do not conclude his prayer, but rather open it. God’s kingship is the beginning point of David’s prayer. God alone is the source of all power and rulership (1 Chr 29:12-13): something Solomon would have done well to heed.

I invite you, friends, to join me in timing your hand-washing to the praying of the Lord’s Prayer.  Let us join the scrupulous care this pandemic enforces concerning outward, physical cleanliness to a like concern for our inward, spiritual hygiene.  Together let us wash and pray, praying as our Lord has taught us.

AFTERWORD:  For a fabulous rendition of Albert Hay Malotte’s musical setting of the Lord’s Prayer by Andrea Bocelli, go here.

One thought on “Wash and Pray”