For Western Christians, January 6 was the Feast of the Epiphany: a day associated particularly with the light of the star that guided the wise men (or, as the CEB and the NRSV Updated Edition more accurately read, the Magi) to the Christ Child (see Matthew 2:1-12).  Until February 27, we will be in the season after Epiphany, during which we will continue to remember and celebrate the light of God’s revelation, symbolized by the Bethlehem star.

Tradition says that there were three Magi, that they were kings from three continents and three races, and that they were named Caspar, Melchior, and Balthasar.  Of course, that is the way it is in our Christmas pageants and in our creches.  But none of this is in Matthew’s simple account:

After Jesus was born in Bethlehem in the territory of Judea during the rule of King Herod, magi came from the east to Jerusalem. They asked, “Where is the newborn king of the Jews? We’ve seen his star in the east, and we’ve come to honor him” (Matt 2:1-2).

The Magi were a clan of priests and astrologers from Persia–our words “magic” and “magician” derive from “magi.”  Matthew does not tell us how many Magi came–the traditional number three comes from their three gifts: gold, frankincense, and myrrh (Matt 2:11-12). The idea that they were kings from distant lands and races comes from Isaiah 60:1-6, traditionally read as fulfilled in the visit of the Magi:

Nations will come to your light
and kings to your dawning radiance.

. . . the nations’ wealth will come to you.
Countless camels will cover your land,
young camels from Midian and Ephah.
They will all come from Sheba,
carrying gold and incense,
proclaiming the Lord’s praises. Still, there is an appropriateness to the tradition’s reading of the Magi as representing the whole outside world.  After all, they come to the manger as the ultimate outsiders.  They come not only from outside of Judea, but from outside the Roman empire itself–from the land of the feared Parthians, an armed and unstable threat on the empire’s eastern frontier. They are not Jews, either ethnically or religiously; while nothing is said of their religious heritage by Matthew, they would have been Zoroastrians.  Remarkably, it is Matthew who tells their story. Matthew, the most Jewish of the gospel writers, is the one who records a visit to the Christ child from gentiles: foreigners and unbelievers!  Yet in this gospel these foreigners come, not as enemies to threaten the Child, but as pilgrims to honor him.

Herod’s religious experts also see the Magi’s star, and rightly interpret the Scriptures that witness to the coming king:

As for you, Bethlehem of Ephrathah,
though you are the least significant of Judah’s forces,
one who is to be a ruler in Israel on my behalf will come out from you.
His origin is from remote times, from ancient days.
Therefore, he will give them up
until the time when she who is in labor gives birth.
The rest of his kin will return to the people of Israel.
He will stand and shepherd his flock in the strength of the Lord,
in the majesty of the name of the Lord his God.
They will dwell secure,
because he will surely become great throughout the earth;
he will become one of peace (Micah 5:2-5; see Matt 2:4-6)

But these faithful, patriotic citizens stay in the false security of Herod’s walled palace, and never see the miracle.  Instead, it is the foreign, Gentile Magi who become the first, faithful witnesses to the new thing God is doing–breaking into our world as one of us there in Bethlehem. 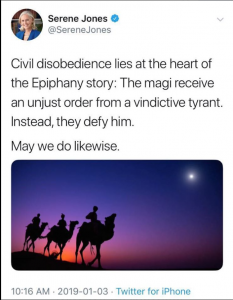 This season after Epiphany celebrates the light of God shining into the entire world with the birth of Christ, and indeed, the light of God’s revelation shining into all our lives yesterday, today–and one day, forever!  May we learn from the wise men to be “wise guys” ourselves: to be ready to receive God’s blessing from the hands, and to hear God’s word in the voice, of a stranger.  May we say to all hatred, racism, and fearmongering a firm and unequivocal “No.”