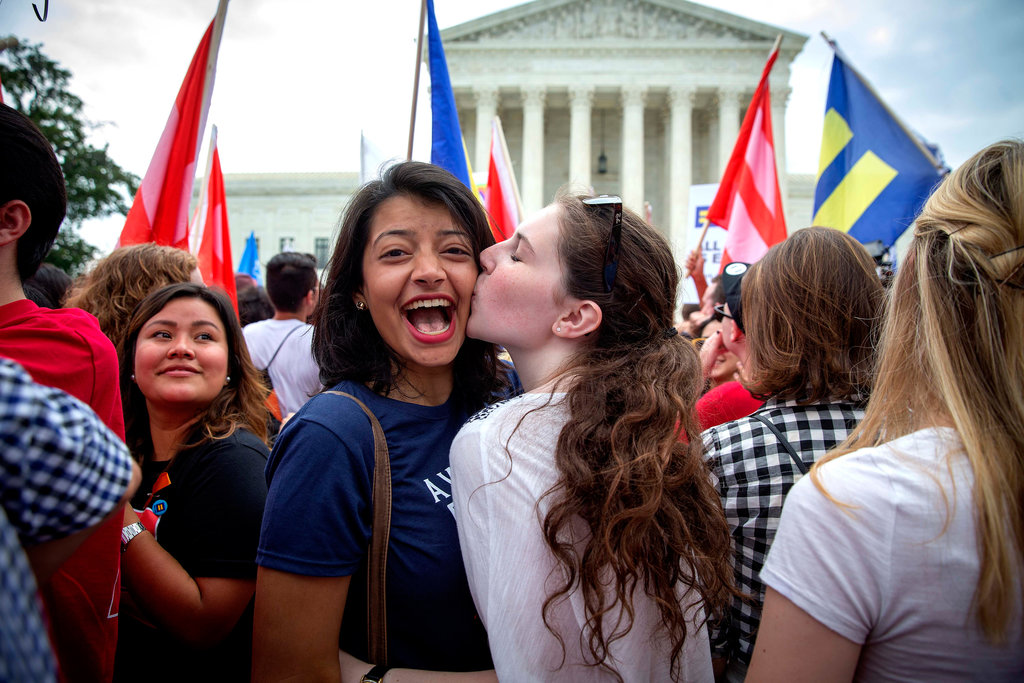 On Friday June 26, by a 5-4 margin, the Supreme Court of the United States ruled that same-sex marriage is a Constitutionally protected right.  Responses, pro and con, were swift in coming.  As a Bible-believing Christian, a United Methodist minister, and a Hebrew Bible scholar who welcomes this ruling, I was not surprised that many other believers did not.  Disagreements among believers on doctrine and Bible interpretation are certainly nothing new, and I have dear friends and family members who I know differ with me on this issue, as on others.

I was, though, saddened by many responses. Christian vocalist and evangelist Carman Licciardello wrote:

I have to hand it to the LGBT community. They have fought for what they believed in much harder than the Christian community ever did. They’re much more united than we are. They comprise only 3% of the American population and took in the 83% who claim to be Christians and won.

Similarly, Republican presidential candidate Mike Huckabee, when asked by ABC correspondent George Stephanopolous if he was calling for acts of civil disobedience against the Court’s ruling, replied:

I don’t think a lot of pastors and Christian schools are going to have a choice. They either are going to follow God, their conscience and what they truly believe is what the scripture teaches them, or they will follow civil law. They will go the path of Dr. Martin Luther King, who in his brilliant essay the letters from a Birmingham jail reminded us, based on what St. Augustine said, that an unjust law is no law at all. And I do think that we’re going to see a lot of pastors who will have to make this tough decision.

Most bewildering was this tweet from Christian radio talk show host Bryan Fischer: 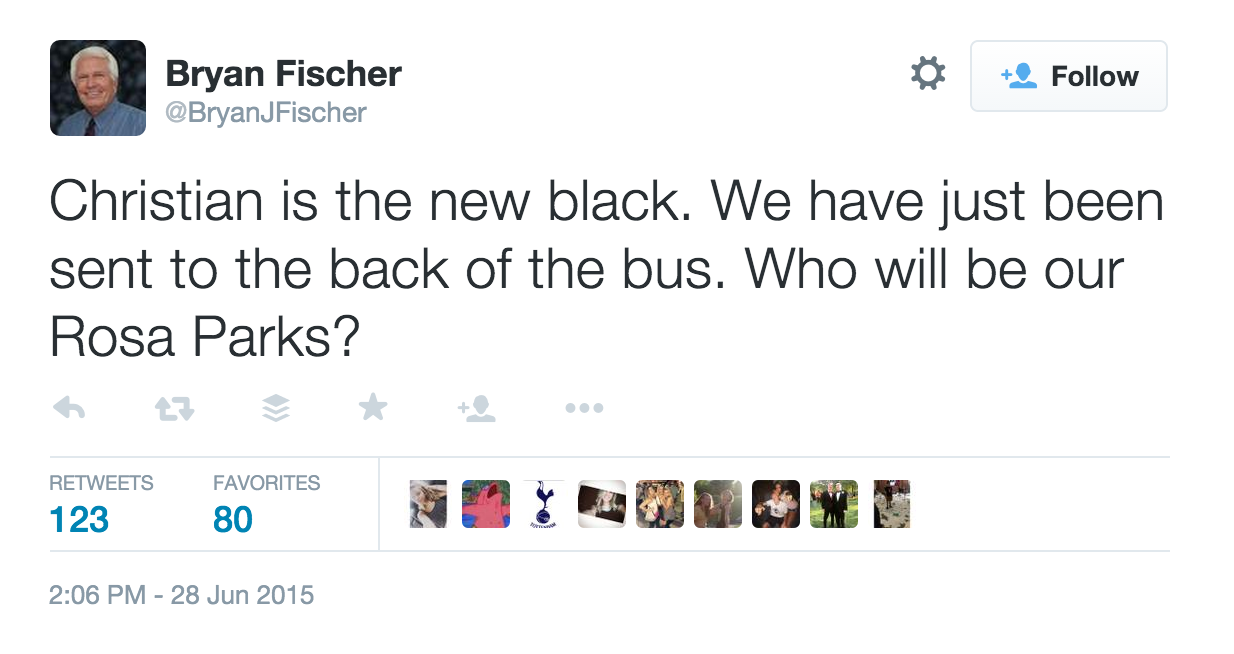 What none of these responses recognize is that not only are there many Christians, like me, who support this ruling, but that there are Christian churches–the United Churches of Christ, the Evangelical Lutheran Church in America, and the Episcopal Church, to name three–that permitted their clergy to perform same sex marriages, where the law permitted, prior to this decision.  What is more, 48% of LGBTQ (lesbian, gay, bisexual, transgendered, and questioning) women and men identify as Christian–indeed, 13% identify as Evangelical, and 11% as Catholic, despite the position of the Roman Catholic Church and of most Evangelical denominations in opposition to homosexual acts, if not to same-sex attraction.  Are these persons, these denominations–let’s make it personal, am I–then, not “really” Christian?

Many friends have posted links to a blog by Jonathan Parnell, titled “Why Homosexuality Is Not Like Other Sins.”  Rev. Parnell writes,

As Christians, we believe with deepest sincerity that the embrace of homosexual practice, along with other sins, keeps people out of the kingdom of God. And if our society celebrates it, we can’t both be caring and not say anything. Too much is at stake. This means it is an oversimplification to say that Christians — or conservative evangelicals — are simply against homosexuality. We are against any sin that restrains people from everlasting joy in God, and homosexual practice just gets all the press because, at this cultural moment, it’s the main sin that is so freshly endorsed in our context by the powers that be. Let’s hope that if there’s some new cultural agenda promoting thievery — one that says it’s now our right to take whatever we want from others by whatever means — that Christians will speak out against it. The issue is sin. That’s what we’re against. And that’s what should make our voice so unique when we speak into this debate.

But what about those of us who genuinely are persuaded that homosexual practice is not inherently sinful?  The response invariably is that those of us who take this position are rejecting Scripture. It certainly cannot be denied that there are passages of Scripture that condemn same-sex relations (though perhaps not so many as is sometimes claimed).  However, the Bible is also perfectly clear on other matters about which we are not so ready to claim its authority.

For example, it is absolutely clear that divorce and remarriage are condemned by Jesus, in the very passages commonly cited as demonstrating that biblical marriage is between one man and one woman (Mark 10:1-12//Matthew 19:3-9; see especially Mark 10:11-12, and compare Matthew 19:9 and 5:31-32; Luke 16:18; 1 Cor 7:10-16).  Yet my own United Methodist Church, which states in its Social Principles that “The United Methodist Church does not condone the practice of homosexuality and considers this practice incompatible with Christian teaching” (2012 Book of Discipline ¶ 161F, p. 111), also states that “when a married couple is estranged beyond reconciliation, even after thoughtful consideration and counsel, divorce is a regrettable alternative in the midst of brokenness” (¶ 161C, p. 109) and that “Divorce does not preclude a new marriage” (¶ 161C, p. 110).

Please do not misunderstand me here.  I do not believe that the Scripture passages regarding divorce and remarriage should be applied legalistically. However, if I am indeed to take the entire Bible literally as word of God, without picking and choosing, then how can I justify reading Mark 10:11-12 any differently than I read  Romans 1:23-27?

The truth is, none of us read the Bible in that way–and we never have.  As Rachel Held Evans reminds us in her thoughtful blog, the “plain teaching of Scripture” has been used far too often to confirm what we already believe: to condemn racial integration, to oppose the ordination of women–even to reject the view that the earth goes around the sun, and not vice versa.  All of our readings of Scripture are interpretations of Scripture, built on who we are and where we stand. This means that we must read humbly and prayerfully, and be prepared to acknowledge the possibility that our reading has been misguided–or at least, that we can learn from a different approach.  Ms. Evans puts it very well:  “One need not discount the inspiration and authority of Scripture to hold one’s interpretations of Scripture with an open hand.”

In the following blogs, I will wrestle with the question of how to read Scripture.  This involves, first of all, a willingness actually to read the Bible, not to rely upon what we already believe the Bible to say.  Secondly, it requires a determination to acknowledge, honestly, the implications of our commitments.  Most importantly, reading the Bible requires that we realize what the Bible is: not an encyclopedia, or an instruction manual, but a confession about who God is, and an invitation into a relationship with God.