They exchanged the glory of the immortal God for images that look like mortal humans: birds, animals, and reptiles.  So God abandoned them to their hearts’ desires, which led to the moral corruption of degrading their own bodies with each other.  They traded God’s truth for a lie, and they worshipped and served the creation instead of the creator, who is blessed forever. Amen.

Same-sex relations, the Apostle argues, are a consequence of idolatry: because the gentile world worshipped idols, “God abandoned them to their hearts’ desires, which led to the moral corruption of degrading their own bodies with each other” (Rom 1:24).  Although homosexuality is for Paul the symptom of that deeper disorder, he unequivocally opposes all same-sex relations–not only male homosexuals (compare Leviticus 18:22 and 20:13), but lesbians too are condemned (this is, by the way, the only mention of lesbians in the Bible). There is no way around Paul’s clear condemnation of homosexuality.  If we want to take the Bible seriously, we must deal seriously with his perspective.

What brings Paul to this conclusion?  To understand his point, we need to understand the line of argument Paul pursues in Romans.  Usually, Paul wrote to churches he had established himself or had already visited, responding directly to the circumstances and concerns of each particular community.  But at the time he wrote to the Romans, Paul had never been to Rome (see Rom 1:8-15). Why then did he write this letter?

Robert Jewett proposes that Paul wrote Romans as an ambassador for Christ, seeking to reconcile the estranged gentile (non-Jewish) and Jewish Christian communities in Rome (see Robert Jewett, “Romans as an Ambassadorial Letter, Interpretation 36 [1982]: 13).  Jewett is persuaded that we too must hear this message of reconciliation:  “The Pauline hope of unification of all peoples through the gospel of transforming love that produces respect between groups as diverse as the Jews and Gentiles urgently needs to be placed on our agenda” (Robert Jewett, “The Law and the Coexistence of Jews and Gentiles in Romans,” Interpretation 39 [1985]: 341).

The gospel Paul proclaims is not for either Jews or gentiles alone, but for all who have faith in Christ:

I’m not ashamed of the gospel: it is God’s own power for salvation to all who have faith in God, to the Jew first and also to the Greek [that is, the gentile].  God’s righteousness is being revealed in the gospel, from faithfulness for faith, as it is written, The righteous person will live by faith [alluding to Hab 2:4] (Rom 1:16-17). 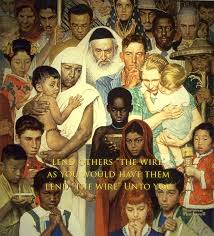 The commonality of all humanity before God–first regarding our sinfulness, then regarding our salvation–is the major theme in Romans.  Paul famously asserts the need of all people for God’s deliverance through Christ:

But now God’s righteousness has been revealed apart from the Law [that is, to the gentiles], which is confirmed by the Law and the Prophets [that is, the Jewish Scriptures]. God’s righteousness comes through the faithfulness of Jesus Christ for all who have faith in him. There’s no distinction. All have sinned and fall short of God’s glory, but all are treated as righteous freely by his grace because of a ransom that was paid by Christ Jesus (Rom 3:21-24).

Of course, it makes sense for Paul to say that he and his fellow Jews have sinned and are in need of God’s grace–God had given them the Law, but they had not followed it.  But the gentiles could well ask, “How can we be blamed for failing to follow a Law that was never revealed to us?”

Paul’s answer is an appeal to creation.

This is because what is known about God should be plain to them because God made it plain to them.  Ever since the creation of the world, God’s invisible qualities—God’s eternal power and divine nature—have been clearly seen, because they are understood through the things God has made. So humans are without excuse  (Rom 1:19-20).

Because nature itself serves to reveal God to all humanity, Paul can even argue for an innate sense of morality in human beings, serving as “the proof of the Law written in their hearts” (see Rom 2:12-16).  Idolatry, then, is not an error born out of human ignorance.  It is a deliberate and perverse betrayal of what we ourselves know to be true!

The consequence of this betrayal, for Paul, is that the gentiles have not only lost sight of who God is, they have forgotten who they are.  As we are made in God’s image, our humanity is compromised and distorted when we fail to recognize God (see Robert A. J. Gagnon, The Bible and Homosexual Practice: Texts and Hermeneutics [Nashville: Abingdon, 2001], 229-303).  Same-sex attraction and relations are the result of that distortion.

In his commentary on Romans, N.T. Wright argues, “We cannot isolate these verses from Paul’s larger argument, both in this paragraph and in Romans as a whole” (N. T. Wright, “Romans,” in The New Interpreter’s Bible, Vol 10, ed. Leander Keck [Nashville: Abingdon, 2002], 435). He also, however, makes an intriguing observation:

It is quite logical to say that we disagree with Paul or that in light of our greater knowledge of human psychology we need to reassess the matter.  That can be argued either way (Wright, “Romans,” 435).

Can we really disagree with Paul?  I suggest that we can.  One of Paul’s deepest insights into the relationship between God and humanity is his realization that we cannot earn God’s favor by following rules.  Why, then, should we think that we must turn Paul into a rule-maker, and follow his teachings legalistically?  In Romans 4:13-16, Paul reflects on Abraham, the ancestor of the Jewish people who, through his faithful example, is also the “ancestor” of gentiles who have faith:

The promise to Abraham and to his descendants, that he would inherit the world, didn’t come through the Law [since the Law was revealed to Moses, and Abraham was Moses’ ancestor] but through the righteousness that comes from faith.  If they inherit because of the Law, then faith has no effect and the promise has been canceled.  The Law brings about wrath. But when there isn’t any law, there isn’t any violation of the law.  That’s why the inheritance comes through faith, so that it will be on the basis of God’s grace. In that way, the promise is secure for all of Abraham’s descendants, not just for those who are related by Law but also for those who are related by the faith of Abraham, who is the father of all of us.

This does not, of course, mean that it doesn’t matter how we live our lives.  In Romans 13:8-10 Paul, like Jesus and the Holiness Code in Leviticus, presents love for the other as the primary ethical principle:

Don’t be in debt to anyone, except for the obligation to love each other. Whoever loves another person has fulfilled the Law. The commandments, Don’t commit adultery, don’t murder, don’t steal, don’t desire what others have [the Ten Commandments: see Exod 20:1-17 and Deut 5:6-21], and any other commandments, are all summed up in one word: You must love your neighbor as yourself [Lev 19:18].  Love doesn’t do anything wrong to a neighbor; therefore, love is what fulfills the Law.

Elsewhere (see Gal 5:16-25), Paul affirms that this very lifestyle of love is itself a gift of God’s grace–the fruit of God’s Spirit.  We are not saved by right doctrine–even Paul’s own doctrine!–but by God’s grace, and called to live lives of love guided by God’s Spirit.

Not only can we disagree with Paul, it is clear that we do–indeed, sometimes that we must–disagree.  For example, in 1 Cor 15, Paul sets forth his passionate confession of the resurrection of Jesus, and the promise that through faith in Christ we share in that resurrection life.  But bodily resurrection is such a strange notion: after all, we know that dead bodies decay and dissolve. How then can they be raised?  Paul answers with an analogy from the natural world:

Just so, Paul says our “resurrection body” will be a different sort of body–a  spiritual body:

Paul’s illustration is based on the best natural philosophy of his day.   We know, however, that our human bodies are not fundamentally different from the bodies of animals, birds, and fish (for this division of living things, see Gen 1:20-25) .  All life on earth today is related: derived fundamentally from the same biochemical root, the DNA molecule.

This, by the way, is a biblical as well as a biological insight.  Genesis 2 affirms that humans and animals are made of the same stuff, and fundamentally linked.

So too, we know that the atoms that make up our terrestrial bodies are no different than the atoms found in the heavenly bodies: the sun, the moon, and the stars. The elements of our universe are forged in those stars, and scattered through the cosmos when they explode in supernovae (like the massive stellar explosion that created the Crab Nebula, pictured above).  Carl Sagan said it very well:

None of this means, of course, that there is no resurrection of the dead!  We do not need to accept Paul’s physics or biology to follow his illustration, and understand his point: resurrection is not resuscitation or reanimation, but a miracle of re-creation.  Similarly, I would argue, we can follow Paul’s logic, and understand his statement of the human condition–“All have sinned and fall short of God’s glory” (Rom 3:23)–without accepting his views on human sexuality.

As Wright concludes in his commentary:

It is, of course, important to remind ourselves that Romans 1 is followed at once by Romans 2, with its emphatic warning against a moral superiority complex.  As the argument goes on its way, Paul’s most damning condemnation is reserved, not for those who engage in what he sees as dehumanizing practices, but for those who adopt a posture of innate moral virtue while themselves failing in their most basic vocation, to be the light of the world (Wright, “Romans.” 435).

The condemnation of homosexuality is not, after all, Paul’s major point.  It is a stage on the way: a demonstration of the (to his mind) inherently perverse and sinful gentile world which, like the rebellious and faithless Jewish world, Jesus Christ had come to save.  We do not need to accept his views on human sexuality to affirm, with Paul, that we are all sinners in need of God’s grace, who through Christ may now be reconciled to God: “all are treated as righteous freely by his grace because of a ransom that was paid by Christ Jesus” (Rom 3:24).

5 thoughts on “What the Bible Says About Homosexuality: Romans and Idolatry”