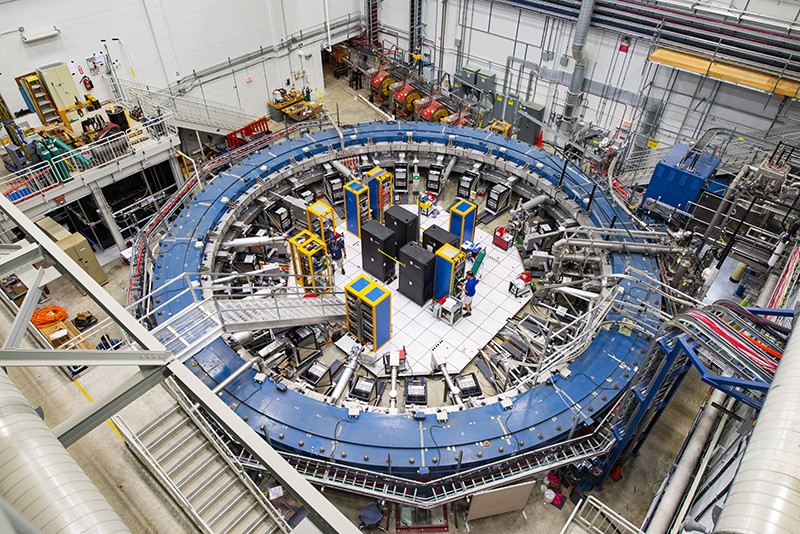 Recent experiments seem to confirm that the behavior of muons–extremely short-lived subatomic particles related to electrons–does not conform to the expectations of standard physics.  The title of an article in the journal Nature describes one reaction to this find: “Is the standard model broken? Physicists cheer major muon result.”  Indeed, the physicists at Fermilab tweeted, “We’re thrilled to announce that the first results from Fermilab’s Muon g-2 experiment strengthen evidence of new physics!”

This reaction may seem surprising.  After all, the Standard Model has for decades been the foundation of modern physics; scientists have spent their careers teaching, and experimentally validating, its claims about reality.  Why should they celebrate the possible refutation (subject to experimental verification!) of their lives’ work?  The answer is in that Fermilab tweet: these scientists are excited by the prospect of “new physics”–discovering something previously unknown about the way that the world works.

I remember eagerly following the news as the very first high-resolution images of Saturn and its rings came back from Voyager 1 in 1980. One planetary astronomer in particular laughed out loud as he told an interviewer, “We were wrong!  Everything we thought we knew about Saturn and its rings was wrong!”  He was not sad to be wrong at all–nor was he resistant!  He did not claim that the Voyager images must be false, or faked, or misleading.  In fact, he was jubilant at the new science those images revealed–and are still revealing.

I thought of that excitement this past week, as I was chasing down a question from my former student and ministry colleague Kerry Dowdy.  She had shared with me a newsletter celebrating National Unicorn Day (I had not known that there was such a thing!), and asked me what I thought.

The newsletter read in part:

Unicorns Are Mentioned in the Bible   The King James Version of the Old Testament contains nine references to unicorns, thanks to a mistranslation of the Hebrew word re’em.  The original word was likely the Assyrian rimu (auroch), an extinct species of wild ox.

Most Hebrew lexicons, as the newsletter also observes, render re’em as wild bull or ox.  Some suggest that it may refer to the now-extinct (since 1627) aurochs (Bos primigenius), a massive wild bull that was the ancestor of our modern cattle.  Perhaps the Greek translators called the aurochs “one horn”  because Assyrian and Babylonian art typically depicted it in profile (as on the Ishtar Gate).

So, why did this delightful unicorn hunt, through ancient texts and images, remind me of the muon experiment?  In the course of my online searching, I found this page in Kenneth Ham’s Answers in Genesis.  The headline says it all: “To think of the biblical unicorn as a fantasy animal is to demean God’s Word, which is true in every detail.”  To be sure, that page covers much of the same ground that I cover above–although it also suggests a variety of extinct one-horned beasts for the biblical re’em.

But the approach of Answers in Genesis is diametrically opposed to the open attitude of discovery exemplified by the physicists responding to the Fermilab muon experiments, or the astronomers responding to the first images of Saturn’s rings.  The assumption of this article, from its beginning, is that unicorns have to be real because they are in the Bible: that is, that what we hold to be true from our interpretation of Scripture must be correct, whatever the evidence says.  This approach condemns the reader to a stagnant faith, unable to accept the possibility that our reading (or in this case, our translation) may be wrong–and accordingly, unable to learn anything authentically new.  By contrast, Hebrews 4:12 says of Scripture,

God’s word is living, active, and sharper than any two-edged sword. It penetrates to the point that it separates the soul from the spirit and the joints from the marrow. It’s able to judge the heart’s thoughts and intentions.

Certainly, this is the way that Jesus reads Scripture in Matthew 5:21-48: not as a dead, static word, but as living!  Six times in this passage, Jesus says, “You have heard it said,” quotes a passage from the Scriptures, and then declares, “but I say.”  Jesus places his own words on a par with Scripture—and not just any Scripture, but the Torah (the first five books of the Bible, still central to Jewish faith and identity) and even the words of the Ten Commandments!

In part, this is what it means to speak of Jesus coming to fulfill the law and the prophets: he is himself the Word of God, made flesh (John 1:14).  But Christian readers should not be too quick to conclude that Jesus sets the Torah aside: after all, Jesus said, “I say to you very seriously that as long as heaven and earth exist, neither the smallest letter nor even the smallest stroke of a pen will be erased from the Law until everything there becomes a reality” (Matthew 5:18).  Jesus’ reading of Scripture is faithful to the tradition, not contemptuous of it.  However, Jesus reads these texts for what they mean, within the whole body of Scripture—not merely for what they say.

For example: the Ten Commandments say, “Do not kill” (see Exodus 20:13).  But that does not mean that any act of violence short of murder is fine.  Jesus knows that violence begins in the heart, in the attitude that demeans and dehumanizes the other.

Words of contempt issuing from such a heart not only lead all too readily to acts of violence, they are themselves already acts of violence.  Rather than narrowing the text to the letter of the law, Jesus’ reading broadens and deepens the text, seeking its spirit.

So too, though the commandment says only, “Do not commit adultery” (Exodus 20:14) this surely does not mean that anything short of adultery is okay!  Adultery too begins in the heart, with the lustful attitude that reduces the other to an object for my own gratification.

Like violence, then, adultery begins by denying the humanity of the other—by refusing empathy.  By reading the Bible this way, not narrowing and restricting the texts but broadening and deepening them, Jesus reads like the rabbis before and after him.

On the other hand, the Torah permits divorce.  Deuteronomy 24:1-4 states that if a man finds “something inappropriate about her” (Deut 24:1 NRSV; the Hebrew is ‘erwah dabar, that is “a shameful thing”), he may divorce his wife.  The rabbis debate what “something inappropriate” means.  For example, Rabbi Shammai concludes that ‘erwah dabar means adultery, while Rabbi Hillel says, “If she burns the meat in the pan, you may divorce her.”  Still, all the rabbis accept the legitimacy of divorce.

But Jesus thinks differently.  In first-century Palestine, women could not own property.  Divorced women could then be left homeless and hungry, unable to care for themselves or for their children.  Jesus recognizes that what is permissible is not necessarily good—let alone God’s best.  He therefore rejects divorce, except (like his near-contemporary Rabbi Shammai) when the relationship is already broken by unfaithfulness.

What does this mean for our own time?  Does Jesus’ rejection of divorce and remarriage hold for us today?  My own denomination, the United Methodist Church, recognizes divorce, and permits clergy to perform marriages for divorced persons.  Is this wrong? I have many dear friends and members of my family who are divorced and have remarried; some are pastors themselves.  Should I tell them that their marriages are invalid, or their children are illegitimate?

I don’t think so. Why should we read the Gospels narrowly and legalistically, when Jesus did not read his Bible in that way?  If we want to read as Jesus read, we must look for how best to live out Jesus’ affirmation of faithfulness and commitment in marriage in our own context, rather than applying to his own words a legalism that Jesus rejects.

Jesus approaches each specific text of the Bible in the light of the highest ideals upheld in the whole of Scripture, seeking God’s intention and desire.  Unlike Answers in Genesis, Jesus does not take the Bible literally.  He takes the Bible seriously—and so must we.  I suggest, friends, that we approach Scripture like those physicists responding to the unexpected results of Fermilab’s muon experiments: not assuming that we already know what the answers must be, but ready to learn, from the text and from the Holy Spirit, something new.

One thought on “Muons and Unicorns”